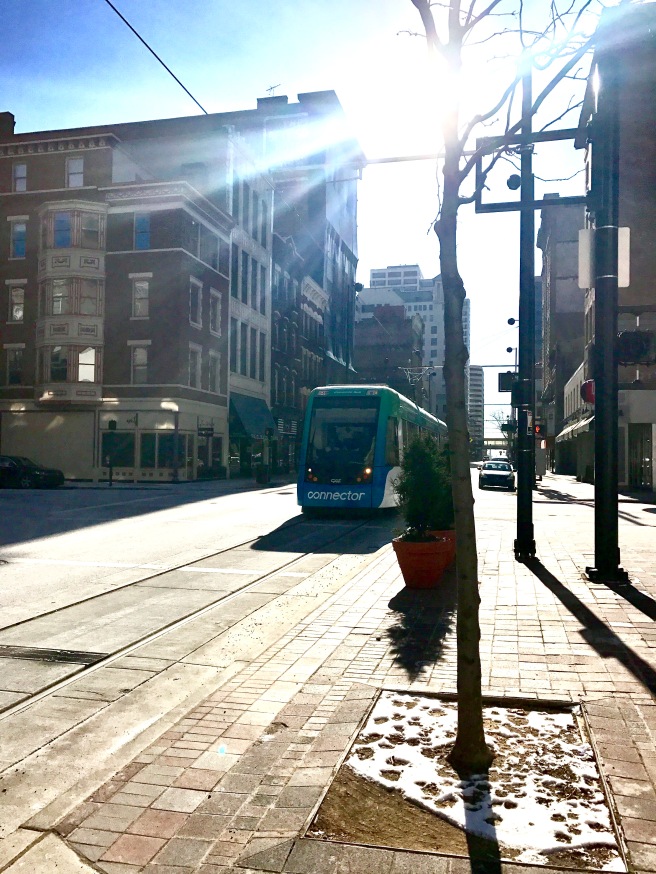 Since the question of the fate of the historic Dennison Hotel in downtown Cincinnati now seems to be coming to a head, I find myself thinking about my blog post Three Reasons to #SavetheDennison from March of last year. If I had to rewrite that  post, I would spend more time exploring the ideas of the second point, “They don’t build ’em like they used to (and they couldn’t if they tried!)”  It seems to me that the physical structure of our cities, and how they have changed over time, is closely tied to the structure of our economy and how it has changed over time.

As of this writing, on paper, our economy seems to be doing OK, with slowly, steadily growing GDP and low unemployment.  Yet people seem to feel a sort of general angst about the economy, as was put on display during the 2016 election.  The reasons are many, and at this point I could bring up the wealth of the “top 1%” and even toss out the mind-numbingly bland yet alliterative phrase “income inequality” (and follow up with a “globalization” and an “automation” for good measure,) but so that you’ll keep reading, let’s just say the general theme of it all is a “great consolidation” that is taking place.  Our economy is seeing a consolidation in the number of “players,” or “actors,” or “decision makers,” and that is making many feeling left out.  This article from local writer David Akidjian is a great read on the subject.  Viscerally we know that it’s impossible to start a business that directly competes with Wal-Mart, and it seems like a small miracle when a brave soul like Matt Woods opens a hardware store in downtown Cincinnati.

What Historic Buildings Can Provide

Now, back to cities.  Accelerating the “great consolidation” today is the loss of fine granularity in new construction projects.  This article from Strong Towns does an excellent job explaining the concept of granularity in our cities.  Basically, a “coarse grained” city block contains a few buildings or lots which have large footprints.  In contrast, a “fine grained” city  block contains many buildings or lots which have small footprints.  Author Andrew Price explains how this concept relates back to the local economy, noting that fine granularity implies many different property owners. It also means a lower cost of entry to build or maintain a building on a smaller lot size.  This means more potential homes for small businesses, and adds up to more players in the local economy.

While almost all of our historic districts are naturally fine-grained, our current economy strongly favors the coarse-grained for new construction.  One reason for this is the parking space requirements imposed on new development by local governments (and sometimes project lenders.)  As parking expert Donald Shoup has pointed out, these requirements are often quite arbitrarily derived and have large but hidden impacts to the costs of business and housing.  They require a lot of space for the parking itself, as well as a project large enough to cover the costs of including it.  Another reason the coarse-grained is favored is that modern processes for development in the city are complicated, and larger developers who navigate them tend to do larger projects. Finally, a downtown-Cincinnati specific reason for the general lack of fine-grained new construction is available land.  Many small parcels do exist, but they are being used as pay parking lots that provide a low risk, low maintenance stream of revenue to their owners, making the owners reluctant to sell or develop.

The fine-grained nature of older buildings makes them more important to maintaining a diverse economy, one with many small, active participants, than ever before.  Fine granularity that is being lost, for the most part, is not being replaced.

How the Dennison Fits In

Now tying it all back to the Dennison.  I’m not trying to say that rehabbing the Dennison would be a small project.  It would take millions of dollars and require obtaining historic tax credits, and the building itself would probably be owned by a medium to large company after the rehab is complete.

I am saying that a loss of the Dennison would be a loss of granularity.  In the current form, even though the surrounding parking lot and Dennison building are currently under the same ownership, the very existence of the building at least makes it possible that the building could be put to a different use or bought and sold separately from the surrounding lot.  However, after demolition, the building’s footprint would be rolled up into the already very large surrounding parking lot also owned by the Columbia group, unlikely to be separated out again.

Given the demolition of multiple surrounding buildings in 1987, this means a block that once had many building types, in various states of repair, with many landlords, charging rent at multiple price points, will now be mostly a single unit controlled by a single entity for the foreseeable future.  And that type of consolidation is what has been happening to our economy in a nutshell.

I believe the same granularity argument applies to preserving the Davis Furniture building on Main Street in Over the Rhine as well.*

*As with everything, though, and for the sake of consistency with my other blog posts, the granularity argument needs to be balanced with other concerns.  For example, I would not oppose a new development on an empty lot solely on the basis of its being coarse-grained: Cincinnati needs to add people, and most new development falls into the coarse grained category.  I also would not, for neighborhood affordability’s sake, be in favor of preserving a something like single story garage if 30 condos could fit onto the site; but these are considerations on a case-by-case basis best left for other blog posts.