OTR is a neighborhood that came of age before the automobile.  Its historic streets and alleys, and the buildings that line them, developed in a pedestrian-oriented manner that had been common to cities for thousands of years prior. It should come as no surprise that the development of the automobile and its subsequent total domination of the American way of life presented a violent shock to the system of the neighborhood.  In the current era, for OTR to make a comeback, it needs to play to its strengths and return to its roots of supporting the pedestrian.  Indeed the extent to which it is a vibrant, walkable neighborhood currently is part of the appeal that draws in new residents and visitors from the suburbs.

And so, parking lots should be minimized throughout OTR, in favor of dense new infill development surrounding the rehabilitation of historic buildings.   However, the sprawled nature of our metro region ensures there will always be a baseline demand in the neighborhood for parking.  This demand comes from both visitors coming in from the suburbs that are poorly served by public transit, and from neighborhood residents who would be unable to access jobs and activities in the suburbs without a personal vehicle.

A good strategy would be to concentrate parking options in a few structured garages in strategic locations around the neighborhood, so that individual developments and rehab projects can incorporate less parking or no parking. 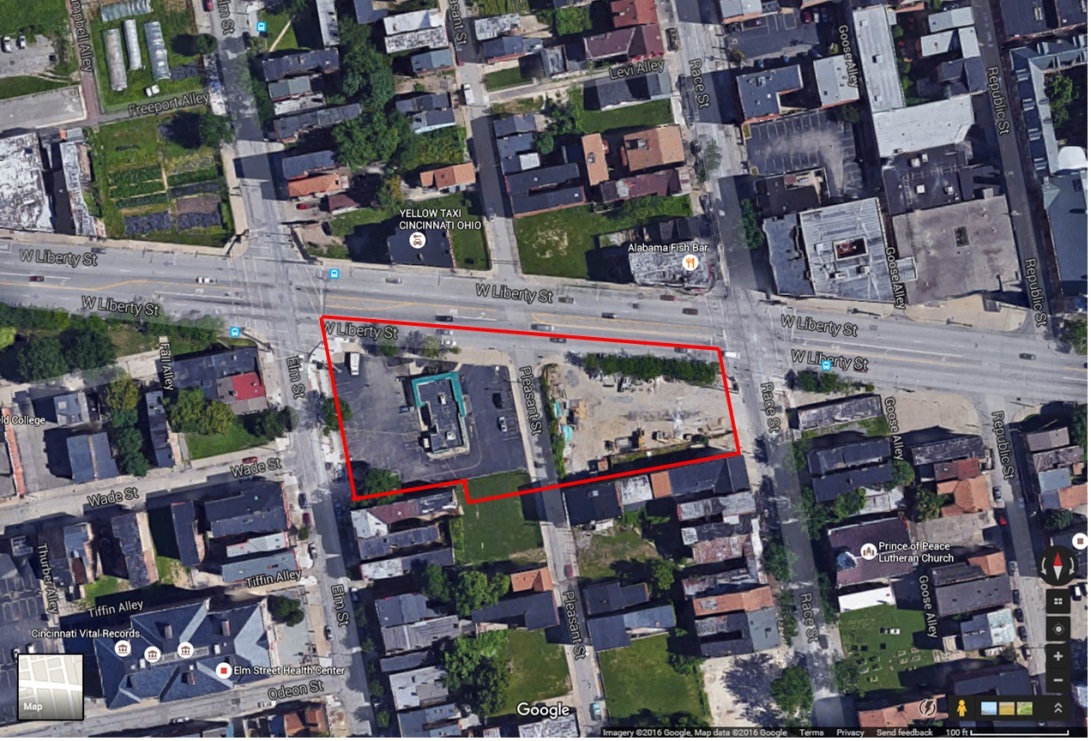 The properties bounded by Elm, Liberty, and Race provide an opportunity to locate one such garage.   Here an underground garage could be constructed, extending underneath Pleasant Street, replacing an empty lot and a cell phone store that is operating in an old stand-alone fast food restaurant.  The underground area for the garage would also be extended 20′ to the north with the proposed narrowing of Liberty Street. A larger garage footprint not only fits in more cars but would allow a designer more options to efficiently maximize spaces in the garage’s interior.

After the garage is constructed, Pleasant Street could be reconnected to the then narrowed and safe-to-cross Liberty, providing a grand pedestrian connection between Washington Park and Findlay Market.  Then, dense mixed use development facing the reconfigured, pedestrian friendly Liberty Street could be built on the two half-block parcels above the garage.