Some simple fixes could remove physical and psychological barriers between Downtown, Over-the-Rhine, and the West End.

In old black and white aerial photographs of Cincinnati, the “basin” area is a teeming metropolis, its densely packed buildings the equal of any city on the East Coast.  Downtown, Over-the-Rhine, and the West End all blended into one contiguous urban form.  That all changed  in the 1950’s and 1960’s with the widespread destruction of the West End for the construction of I-75 and the “Queensgate” industrial park, which up until that point did not exist. Kenyon-Barr, an expansive African American neighborhood with exquisite architecture, was tragically razed and thousands of families were displaced (more on that here, here, and also here if you enter the search term “Kenyon Barr.”)  This kind of widespread destruction was known by the misnomer of  “urban renewal” and was actually quite typical in American cities at the time.  Urban renewal and its associated policies were what Jane Jacobs railed against in her 1961 classic “The Death and Life of Great American Cities.”

Today, while I-75 forms a formidable barrier between Downtown and Queensgate, the northern portion of the West End still exists thanks to a dogleg in the highway, and abuts northern Downtown and Over-the-Rhine.   However, there are several other flaws in the urban form that conspire to cut the West End off from Downtown and OTR, both physically and psychologically.  Let’s examine some of these issues near the West End’s Betts-Longworth historic district. 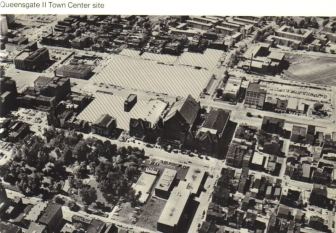 An “urban renewal” era plan for the area behind Music Hall shows a lack of acknowledgement of the importance of pedestrian street life, which was typical of time. The plan was partially implemented.

Beginning on Central Parkway behind Music Hall, we see this extremely long double turn lane.  There are never enough cars turning left onto Ezzard Charles Drive here to justify this.  It should be reduced to a shortened single turn lane in order to return more space to the landscaped median and make it easier for pedestrians to cross the street (which forms the dividing line between OTR and the West End.)  Some shade providing trees could also be added. 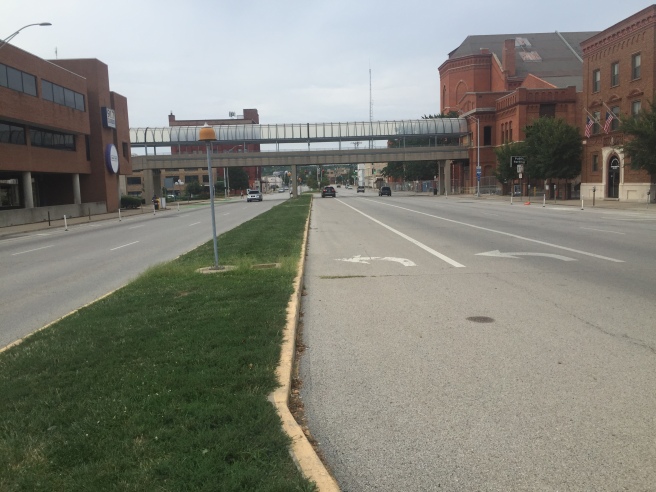 At Central Parkway and Ezzard Charles Drive, a strange parking garage/park hybrid wraps the north end of the NPR/WCET studios.  This park features a shady amphitheater.  But since it is not visible from the street, not many people know it’s there, let alone actually utilize it.  It could be redesigned to be more open to the street.

Also in this parking garage/park is a really cool piece of art- a horizontal clockface that is illuminated by light coming down from a circular opening above it.  But once again, unless you parked at the north end of the Town Center parking garage (which is severely underutilized on weekends,) you’d have no idea it’s there. 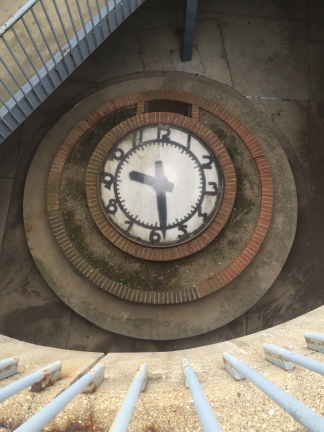 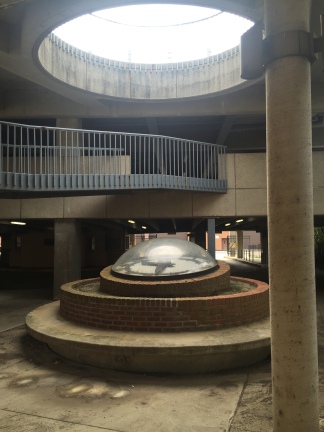 On the top level of the garage lies this pedestrian bridge over Central Parkway to Music Hall.  It is crumbling and in need of repair, replacement, or removal, which is the subject of some controversy.  For context, all across the country, “skywalks” such as these are being removed in order to return pedestrian life to the streets.  I’m a little bit ambivalent about the fate of this one.  I don’t think that rerouting the little old ladies using it to go from the parking garage to the symphony is going to make or break street life down below.  However, I question the need to spend public dollars to repair or replace it, especially considering the multi-million dollar price tags being floated around.  Furthermore, as the previously discussed items demonstrate, the entire surrounding structure could use a redesign, and a new skywalk might not make sense as a part of whatever comes next.

One block west of Central Parkway, the backside of Town Center garage along Central Avenue creates a two-block long pedestrian “dead zone” with no storefronts or front entrances to break up the monotony. It’s a sharp contrast to the eye-catching historical building across the street.

The Town Center garage will have to be at least partially replaced for there to be any life along its side of Central Avenue.

Central Avenue itself inexplicably changes at 7th Street from a two way street into a one way street for 0.45 miles northwards through this area and then changes back into a two way street again at Ezzard Charles Drive.  This provides no benefit to traffic flow and simply encourages cars to speed on the one-way portion, creating another barrier for pedestrians traveling between OTR and the West End.   It also greatly and needlessly complicates navigating the neighborhood in a car.  Turning this stretch of road back into a two-way street should be a no-brainer. 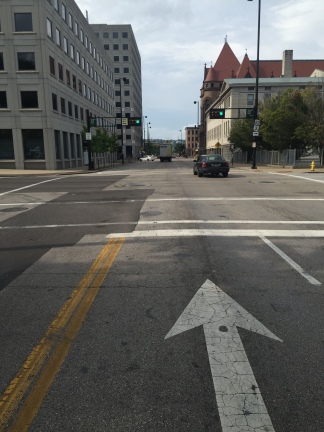 Another street grid oddity exists at what would be the intersection of Hopkins St. and Central Avenue.  Instead of an intersection, Hopkins St. was made into a cul-de-sac years ago and a Cincinnati Parks Department maintenance garage was built along Central Avenue.  The garage looks aging and underused, and forms another barrier for pedestrians going between OTR and the West End as there is no pedestrian cut-through. 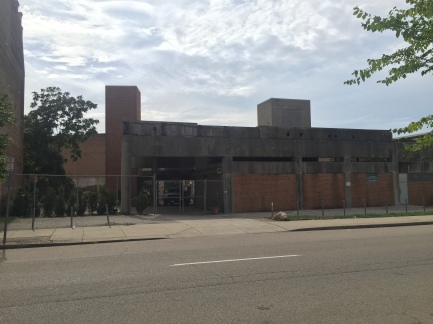 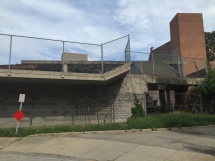 This garage should be torn down to fully reconnect Hopkins Street to Central Avenue.  This could also return land for development at the corner of Hopkins and Central Avenue.

South of the Town Center garage and NPR/WCET studios, the Charles Street electric substation takes up a lot of real estate.  It greets the street with a blank brick wall, creating a zone devoid of human activity right at the point where Downtown, OTR, and the West End meet.  Unfortunately this substation would probably be very expensive to completely move.

Finally, Court Street is the only street that travels uninterrupted all the way from the West End directly into Downtown.  Unfortunately there is an asphalt sea of surface parking lots along Court Street at the boundary between the two neighborhoods.  If  residences and businesses were built in the place of these lots, it would go a long way towards weaving the neighborhoods together and encouraging pedestrian traffic between them.

This Court Street “parking crater” could be an opportunity to add residents.

6 thoughts on “Reconnecting the West End”